In an age where most of our music is electronically enhanced (I’m trying to be gentle), it’s a really nice feeling to receive compliments for our natural sound. It’s interesting because most people have no idea how how much nature has shaped what we do. I could tell you about how fussy Sadiki is about eating organic foods, juice fasts and cleansing but I want you to keep reading. Instead, I’ll start by telling you about our rehearsals outside on his magical deck. 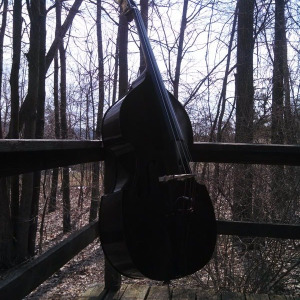 Being born and raised in Queens and then going to college and working in Manhattan, Sadiki’s place in the middle of the scenic Hudson Valley has always been a relaxing paradise that seemed to be constructed from the pages of a novel. I have written most of my songs in noisy apartments, on the subway or on buses. I’ve then rehearsed them in churches, theaters or studios. It was a new experience to create in an environment where the only things I could hear were birds and crickets engaged in a chirping competition while the wind blowing through the leaves provided a seamlessly disarming backdrop. At first, I had to learn to focus on whatever we were working on. It was SO easy to get distracted watching the hummingbirds chase each other or marveling at the stillness of the frogs who seemed completely at peace sitting right next to us as we rehearsed. Fortunately, I grew accustomed to nature’s charms and and before long, I too was in love with creating and rehearsing outdoors. I discovered a musical freedom there that I hadn’t felt since I was a child and it’s been a tremendous part of our identity ever since.

As much as we enjoy our outdoor songwriting and practice sessions, almost all of our gigs have been indoors at high-end events. We love performing on stage with fancy colored lighting and high-tech sound systems in front of hundreds of well dressed patrons but if I’m being completely honest, it always feels like we’re reenacting the magic that only truly emerges when we’re outdoors. I’ve only realized this truth during the past few months. Last winter was a long and harsh one. It may have been the worst one of my life. If not, the fact that it is the most recent one coupled with my new-found adherence to lady-like behavior (no more sleigh riding or snowball fights) certainly makes it seem so. Like most New Yorkers, I longed for spring’s return. The change in weather brought with it the pleasant gift of several outdoor bookings.

Because we grew used to performing indoors, we initially looked at performing outdoors as a logistical nightmare. Where would we get power from? Would our sound get lost since there were no walls and ceilings? And of course, would the weather cooperate? To make matters worse, our first outdoor event was a rooftop wedding in midtown. While the view was fantastic, it rained on and off all day so everyone was understandably nervous. Fortunately, the rain stopped a few minutes before the ceremony was supposed to begin and we were able to get setup and start performing on time. Although the sun decided to make a fashionable entrance, there wasn’t enough time for it to dry anything including the chairs so all of the guests chose to stand. Although it appeared inconvenient, the ceremony became even more intimate. The puddled rooftop reflected the gorgeous sky and the sun’s rays shining through the moist air created a heavenly glow around everything. The stunning bride walked in to our rendition of Robin Thicke’s Angel and it was truly one of the most breathtaking moments we have ever seen. It certainly set the tone for our other outdoor events.

Since then, we’ve had a few outdoor performances in the Hamptons that were beautiful but pretty much everything out there is beautiful so that’s to be expected. The first thing I noticed was how perfect the temperature was. To be fair, I’m sensitive to temperatures since my biggest professional hazard is having to wear dresses made of about as much fabric as one of Sadiki’s ties. As a result, I’m usually uncomfortably cold whenever we perform. At these outdoor gigs, the sun’s warmth has been such a cozy reprieve. The gentle breeze has also been a welcomed participant. On more than one occasion, it has encouraged the trees to sway along with our music…or did it just seem that way because the legendary Hamptons traffic took a piece of our sanity? 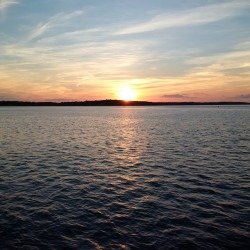 After one of our Hamptons performances, we were invited to perform on a yacht for a small dinner party. While watching a dazzling sunset, we performed a few tunes during dinner. Towards the end of our set, the ocean was so still that it seemed like we were sailing on a sea filled with stars. The yacht swayed ever so gently and it was during this peaceful juncture we performed My Funny Valentine for a couple visiting from Europe to celebrate their wedding anniversary. The hypnotizing setting inspired us to deliver our most heartfelt performance of the song to date. When we finished, the teary eyed couple was overwhelmed with gratitude. While we graciously accepted their thanks, we shouldn’t have taken all of the credit. We would never have performed the song that way without nature’s assistance.

And for all of this, we say thank you to nature for the many ways it has and continues to inspire us. We just hope it forgives us for expressing our gratitude via a blog post!