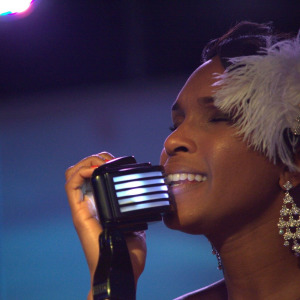 We  were recently asked if we had a favorite performance. It is a tricky question to answer because there are several that come to mind but the one that stands out the most happened at a jazz festival in Martha’s Vineyard last year. We were honored to be invited to perform alongside many talented and accomplished musicians…and to be completely honest, we were also a bit intimidated. It was our first year performing together and we still had our doubts. To make matters worse, I was getting over a cold and my voice was not cooperating with me. The bands who performed before us were amazing and received deafening applause after almost every song. You could tell that the crowd really enjoyed them. When it became our turn, we played a few covers to ease them into our unique style and what an upright bass and voice duo can sound like. Perhaps it was a friendly audience because we too received our fair share of applause. As my voice warmed up, we became more confident and decided to perform one of our originals called Come Out Love. Its soul stirring melodies combined with intimately introspective lyrics invoke emotion when we are at our best. Unfortunately, it is exceedingly difficult for Sadiki to play and me to sing, especially when my voice is on the mend. On that evening, we both made a few mistakes but nothing catastrophic…or so we thought. When we ended, there was no applause. There was no movement. There was only silence. We looked out at the crowd and saw many with their heads down and eyes closed. The lively atmosphere that we inherited seemed like a distant dream. In its place, there was a calm and peaceful state that would be more appropriate at a meditation retreat than a jazz festival. The quiet was eventually broken by a few people whispering their wonder. After that performance, we finally believed we had something special.